You are here: Home / Visitors / History

The community that was to become Wabamun

was not originally located on its present site. Rather, it was situated on the northwest corner of Moonlight Bay on Lake Wabamun. With the arrival of the Grand Trunk Pacific Railway, the community was moved to its present location. A feat made possible by the cold winter of 1911 to 1912 which allowed the buildings to be moved across the frozen lake. The community of Wabamun, named after the native word for “looking glass”, was officially incorporated as a Village in 1912.

In those early years the Village’s economy centered around two things: the proximity of the lake and the presence of the rail line. The railway company promoted Wabamun as a summer resort to encourage tourists from Edmonton. The combination of the rail line and the lake also allowed for the development of a commercial fishing industry. Fish were shipped by boxcar as far away as New York. In winter, ice was cut from the lake to supply railway refrigeration cars.

Additionally, the rail line allowed development of the nearby coal resources. Initially, coal was used locally for domestic heating purposes. Later it was also shipped by rail to a power generating station in Edmonton.

The development of the Wabamun Provincial Park as well as the Village’s Waterfront Park, boat launch and a federal pier have increased Wabamun’s appeal as a recreational and tourism destination. In 1996, the addition of a private marina and boat launch capable of launching and mooring large sailboats has played a key role in attracting boating enthusiasts.

You can learn more about the history of Wabamun and the surrounding area by visiting the Wabamun & District Museum, located at 5140 52 Ave. 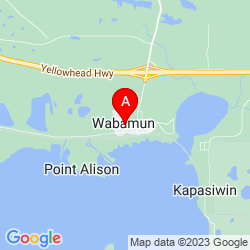