*** After hours book drop is located at the entrance to the library.

Mission Statement
The Wabamun Public Library strives to be a welcoming facility, enriching lifelong learning, stimulating the imagination and encouraging the understanding of the library’s role within the community.

Under the sponsorship of the Home and School Association, the Wabamun Community Library was opened to the public on September 12, 1960. It was housed in the Old Wabamun School.

On July 7, 1980 the Village of Wabamun passed By-Law 17-80 which brought the Library under the umbrella of Village Services and became the Wabamun Public Library. Talks soon began to move the Library from its present site to the new addition being built onto the Community Centre. The Library Board had to find the money and volunteers to install walls, exhaust system, suspended ceiling and the electrical work needed. Money and help came from the Village, the Wabamun Lions Club, Stony Plain School District, Alberta Cultural Grant, Village of Wabamun 75th Anniversary Grant and many individuals who were committed to having a first class library in their area. Saturday, January 29, 1983 saw the Grand Opening of the new Library in the basement of the Community Centre.

The Library was open on Mondays with volunteers filling the position of librarian. The first Librarian was hired in July of 1984.

In 2000 the Library expanded and moved into the area previously occupied by the Playschool. Then it became time to automate the library. Books were barcoded, public computers were introduced to the patrons and we moved into the 21st century.

The library of today boasts an array of books, videos, periodicals, plus 6 computer work stations and a long list of programs and services to meet the needs of our community. 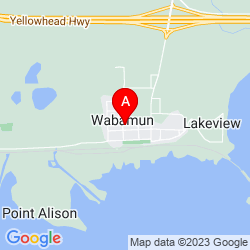